Yes, it’s a thing. Since last summer, the 2016 Presidential election has been the number one story in print, television, and electronic media. But we don’t have to tell you that. You know it and you’ve lived it just like we all have. Unless you’ve been living on a mountaintop in the Himalayas, under a rock, or on a tropical island with no phone, internet connection, or contact with other humans, you’ve seen the candidates go at each other from the primaries through the national conventions to the current general election. If you’ve managed to miss the madness, we’re very jealous. And you should consider yourself very lucky. With just a couple of weeks left before the nation votes, most of us are ready for this whole thing to be over—as in yesterday.

If you’re stressed out about it, you’re not alone. The results from a national poll of adults 18 years and older commissioned by the American Psychological Association (APA) reveal the following statistics:

Most of us have seen crazy memes on social media from both sides of the aisle. We’ve spent precious time and energy reading stories, watching video clips, or responding to threads posted by family, friends, or that old high-school classmate who’s very opinionated and not afraid to make inflammatory comments. We’ve blocked people, stopped following them, or cut them out of our circles altogether. We’ve tried to educate our kids about how we elect our President, but honestly—after the last couple of debates and the way the last month has gone—most of us don’t want our kids anywhere near the election news.

It’s a slow-motion train wreck: it triggers our fight-or-flight stress response but it’s virtually impossible not to watch. If you’re stressed out about what’s going to happen November 8th, take heart. There are some simple things you can do to handle it. Here’s what the APA recommends:

The Opposite of Election Stress 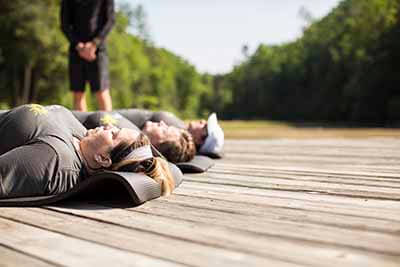 Here at Skyterra we have another idea about how to beat Election Stress Disorder. We truly believe what we’ve got going on here in our little corner of the world is the perfect antidote to election stress. We’ve got the beautiful Blue Ridge Mountains of North Carolina. We’ve got lakes, streams, and secluded hiking trails. We’ve got breathtaking vistas of changing autumn leaves. We’ve got daily yoga, mindfulness, meditation, and exercise classes.

We don’t put on the TV news.

We’re the opposite of all the contentious political back-and-forth. We’ve got a compassionate, caring, and professional staff dedicated to helping you relax, unplug, de-stress, and reset your internal social, spiritual, and physical systems. We’ll design a personalized weight-loss, stress reduction, or exercise program tailored to meet your specific needs.

Sure, it’s a thing. But you know what else is a real thing? A trip to Skyterra. Book your trip today and we’re sure you’ll agree: we’ve got the remedy.