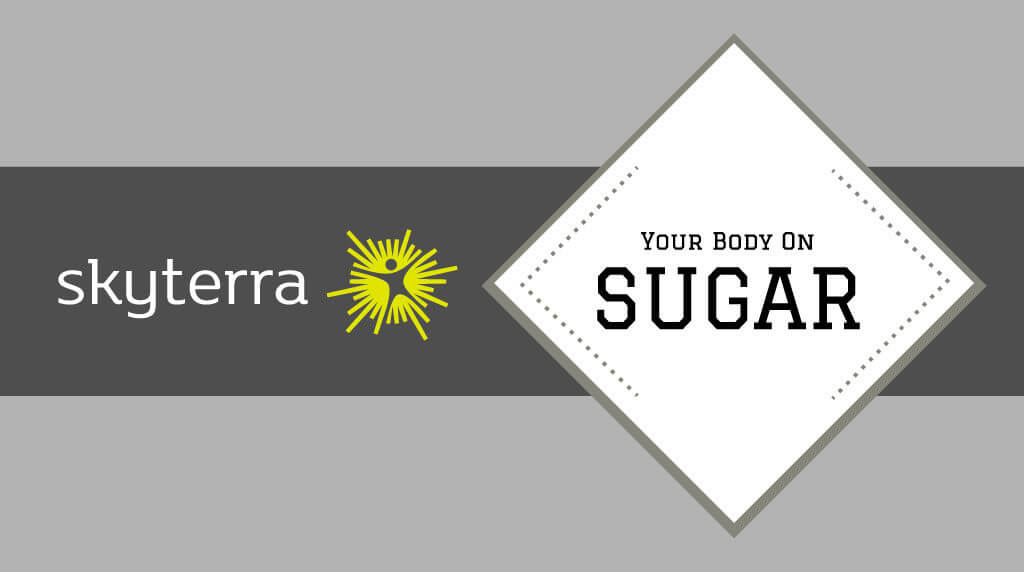 Your body on sugar: What's the big deal?

There has been a big shift in popular thought on nutrition in recent years. After decades of vilifying fat nearly exclusively, research and dietary experts are confirming what many have long suspected about your body on sugar: Excessive sugar wreaks havoc on health.

What’s going on here? Well, our understanding has deepened. Some of the old knowledge about nutrition for heart health and weight loss does hold true, but in many other ways, that old guidance is misleading or incomplete.

The human body has powerful reactions to sugar consumption. Some of these effects occur every time you eat something sweet, while others manifest over years of flooding the body with too much dietary sugar. 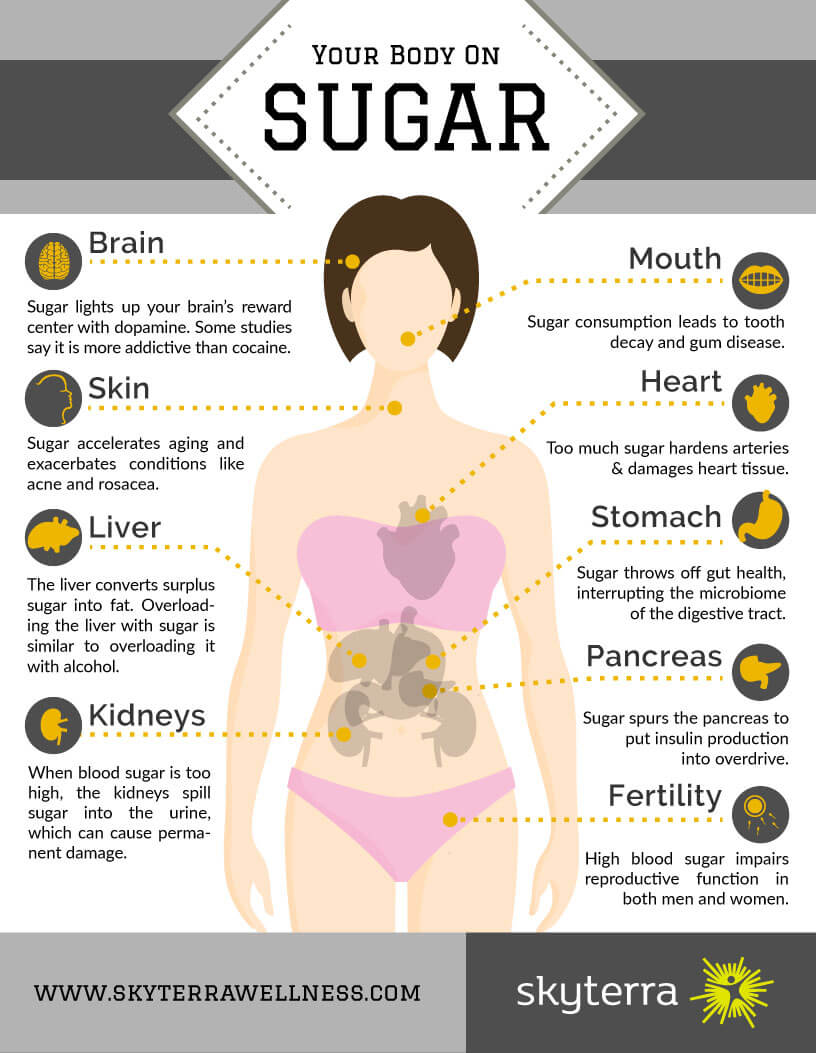 Sugar on your tongue triggers the beginning of a full-body reaction. As soon as your taste buds detect sweetness, they start sending signals to your brain and body that a reward is on the way.

Sugar also has immediate effects on your mouth itself. Sugar consumption leads to tooth decay by feeding the bacteria in your mouth. Bacteria eats sugar and produces acid as a waste product, which breaks down tooth enamel over time.

When we are motivated to improve our diets, it’s usually because of food’s effect on our bodies: We want better digestion, body composition, or energy levels. But we often overlook our diet’s effect on our brains and vice versa.

Once your brain receives a signal that sugar is on the way, its reward system lights up like 4th of July fireworks. As a result, it is remarkably addictive – even more so than cocaine.

Celebrity dermatologists are fond of saying that reducing your sugar intake can make you look younger and improve the overall appearance of your skin. Don’t dismiss this notion as a quasi-scientific myth that needs to be debunked. It’s well supported by scientific research.

Sugar intake causes your insulin levels to spike (see 'Pancreas', below) which in turn prompts inflammation. Inflammation, among other things, produces enzymes that break down skin-supporting collagen and elastin in a process known as glycation. In this manner, glycation accelerates the effects of aging and exacerbates pre-existing conditions like acne and rosacea.

Sugar overconsumption has a negative impact on gut health. Eating too much refined sugar throws off your gut flora, contributing to higher levels of “bad bacteria” in your digestive tract.

Poor gut health contributes to indigestion, but more and more research supports the notion that gut health has long-term systemic effects on your total body and even mental and emotional health.

After your digestive system breaks down the sugar you eat into glucose and fructose (the units your body uses for fuel), these products enter the bloodstream and hit the pancreas. This prompts your pancreas to produce insulin – a powerful hormone that regulates your blood sugar levels and directs your cells to take in sugar from the bloodstream.

Over time, high insulin in the body creates pre-diabetic conditions and even type II diabetes. But even before those symptoms become apparent, your pancreas begins to show signs of overload and damage. Meanwhile, the rest of your body begins to develop insulin resistance, which comes with a host of problems of its own (including weight gain, increased hunger, and sluggishness.) With a poor diet, it’s even possible to completely destroy the pancreatic beta cells that produce insulin.

One of the liver’s many roles is to convert the sugar your body doesn’t need to use right away into fat, so it can be stored and burned for energy later.

With an overload of sugar (specifically, fructose) the liver goes into overdrive. Recent studies indicate that overconsumption of sugar damages your liver in a manner similar to drinking too much alcohol. Over time, this can lead to serious health problems like non-alcoholic fatty liver disease.

Overconsumption of sugar leads to hyperglycemia and/or diabetes, which is the leading cause of kidney failure in the US. When your blood sugar is too high, your kidneys spill sugar into the urine, which can lead to long-term kidney damage.

It was long believed that rich, fatty foods were the main dietary contributors to heart disease, but a body of recent work indicates that sugar over-consumption is equally (if not more so) damaging to the heart.

Studies found that high blood sugar levels contribute to atherosclerosis (hardening of the arteries) and damage the heart tissue itself.

In the past, anti-fat thinking led many people to swap out higher-fat items in their diets in favor of lower-fat but hyper-sweetened ones. When eating for heart health, it’s important not to replace fatty foods with sugary ones.

Sugar overconsumption is known to negatively impact both male and female reproductive functions in various ways. Eating too much fructose and glucose can turn off the gene that regulates the levels of active testosterone and estrogen in the body.

In men, high blood sugar impairs sperm production; in women, it can interfere with ovulation and increase the likelihood of PCOS and endometriosis. 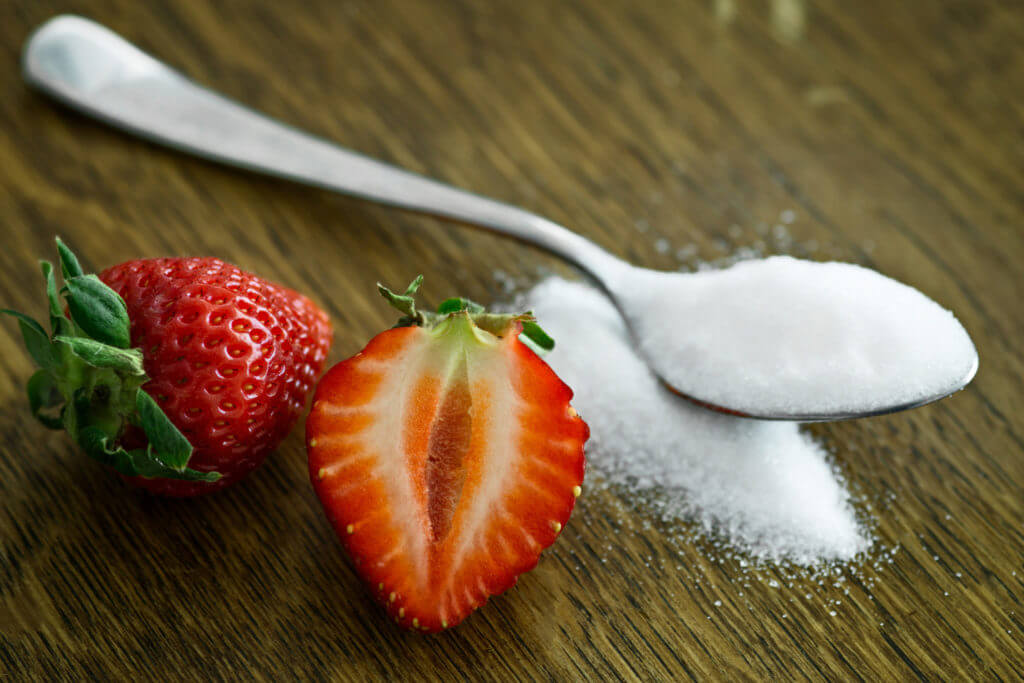 It can be downright depressing to hear about the downsides of our favorite foods! The good news? There are plenty of low-sugar, nourishing and nutritious food options out there, which fits in with Skyterra’s dietary philosophy focusing on whole, seasonal foods and high-quality protein sources.